For an idea of what to expect, check out the festival info in our Festival guide - link below
Festival Guide 2019
Our 2019 New Year's Festival Theme is...
Haus of Fruits - Category is Family
We can't wait to meet YOUR family this New Year's Eve. 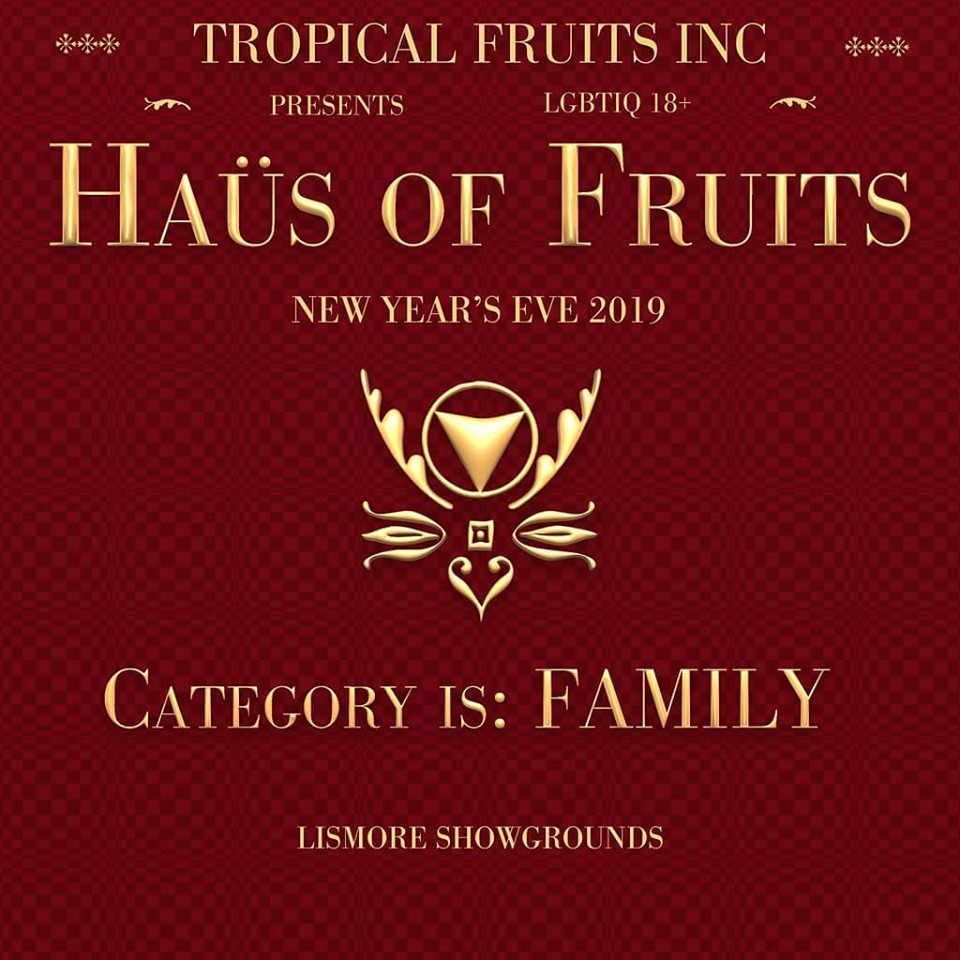 And we bet you can't wait to meet OUR Family... Revealed below... Just scroll down to meet them ... 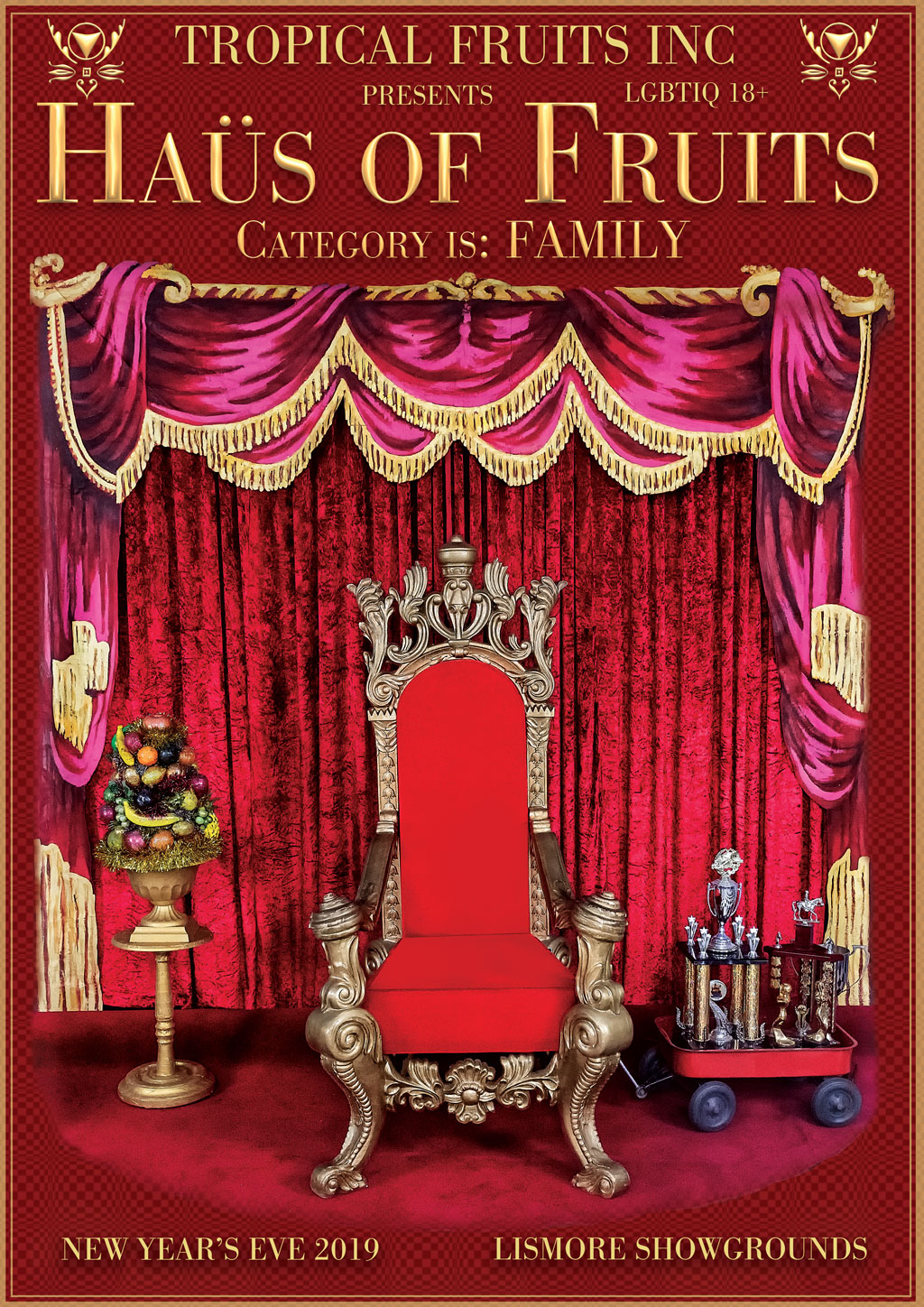 Marcus is a Tropical Fruits Superstar.  Not only has he performed in many shows and volunteered for years, he and his partner were in charge of running the Pool Party for several years.  A fabulous hairdresser - one of the best colourists around. Marcus is known in the Fruits family and wider community for his mischievous smile, his compassion and is one of our ever exuberant faeries. 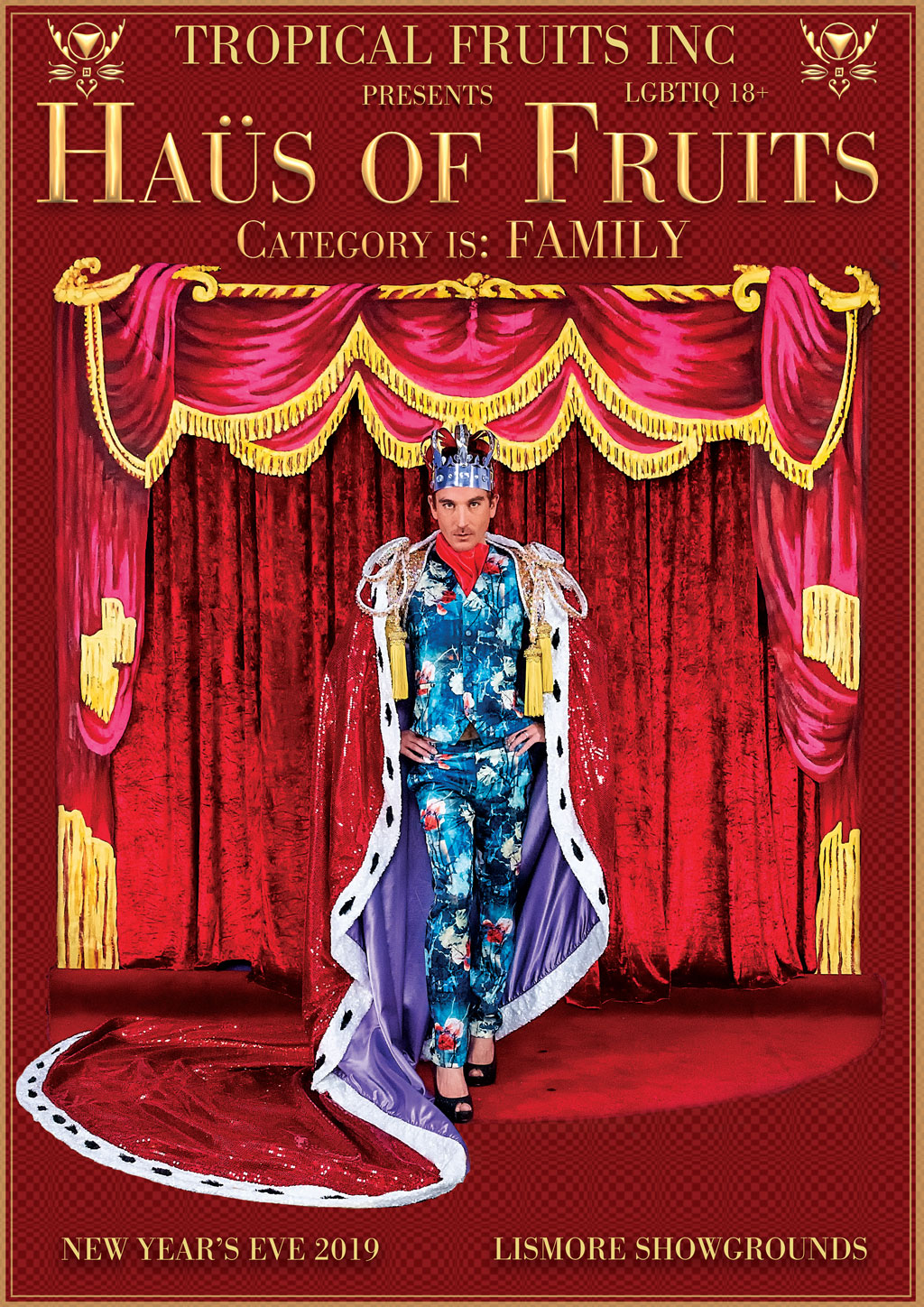 Aura has been involved with Tropical Fruits for a decade now.  From involvement with the Fruits Youth Group years ago, to volunteering for many, many events over the years. Aura is blessed with an artistic ability that is eclectic and unique. She brought us the new and improved Women's space last year and is now on the Committee. She will be curating Women's space again this year and assisting in Gem. Aura is a strong, proudly Queer young woman in our community...watch her roar! 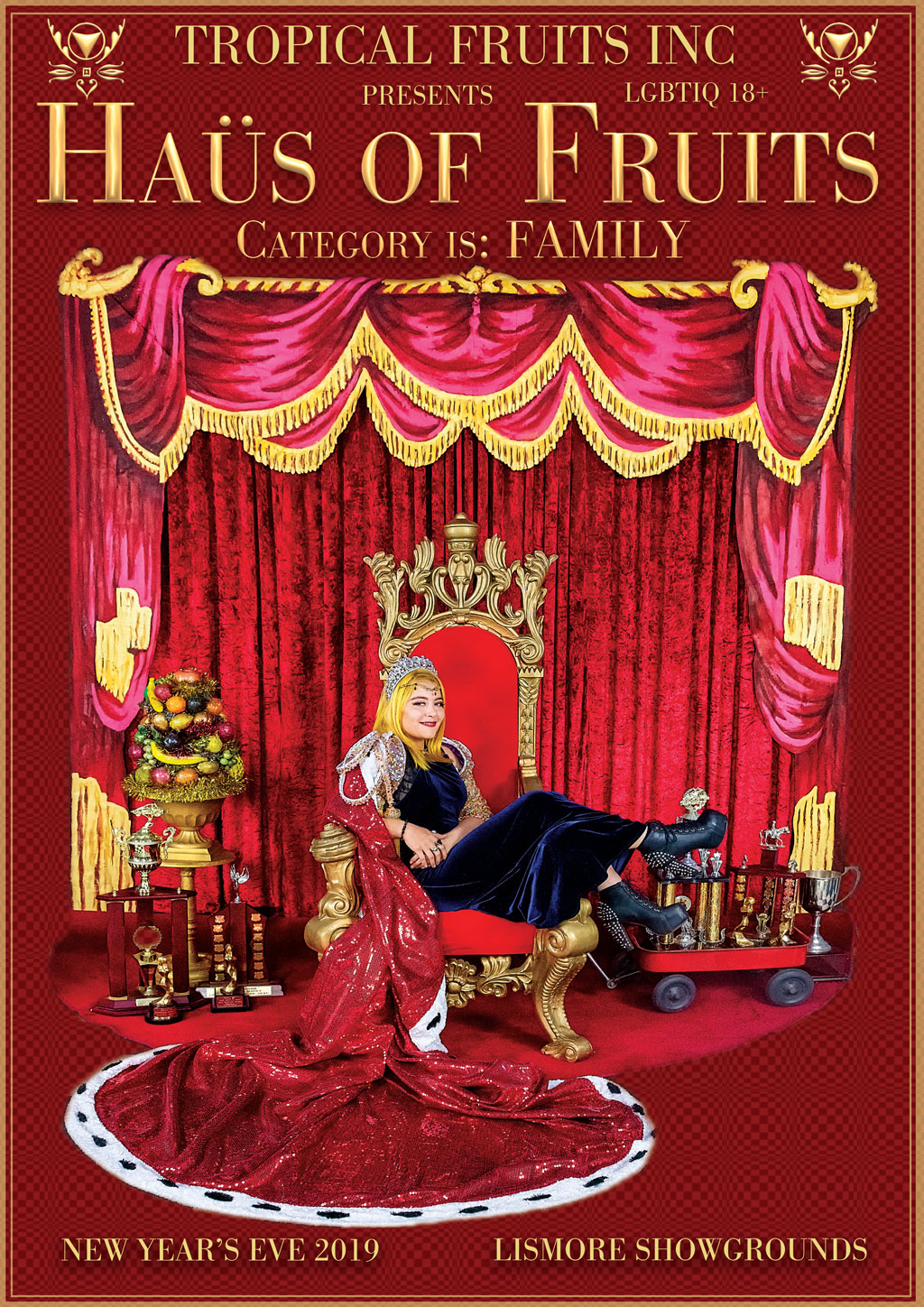 Stephen is a DJ legend in the LGBTIQ music world…40 years in the scene, over 15 yearsof playing at the Sydney Mardi Gras, he was part of the first protest marches in 1978. Also known as Mr Disco and DJ LoveTattoo, Stephen has been a prolific producer - releasing a track called Drop Some Drums which made it onto In The Mix’s 100 best Australian Dance Tracks of All Time in 2000.  He received the "Outstanding Contribution to Dance" award at the DMA's in 2001, is the only Australian DJ to get a lifetime achievement award from 3D Magazine and was the first DJ to be inducted to the Mardi Gras Hall of Fame. He was one of the first Australian DJ’s to program RAGE on the ABC. Stephen played at the locally famous fundraiser Nudge Nudge Wink Wink parties at the Billinudgel hotel and ran My House in Mullumbimby for years.

His dance credentials are second to none and he IS the Godfather of house! 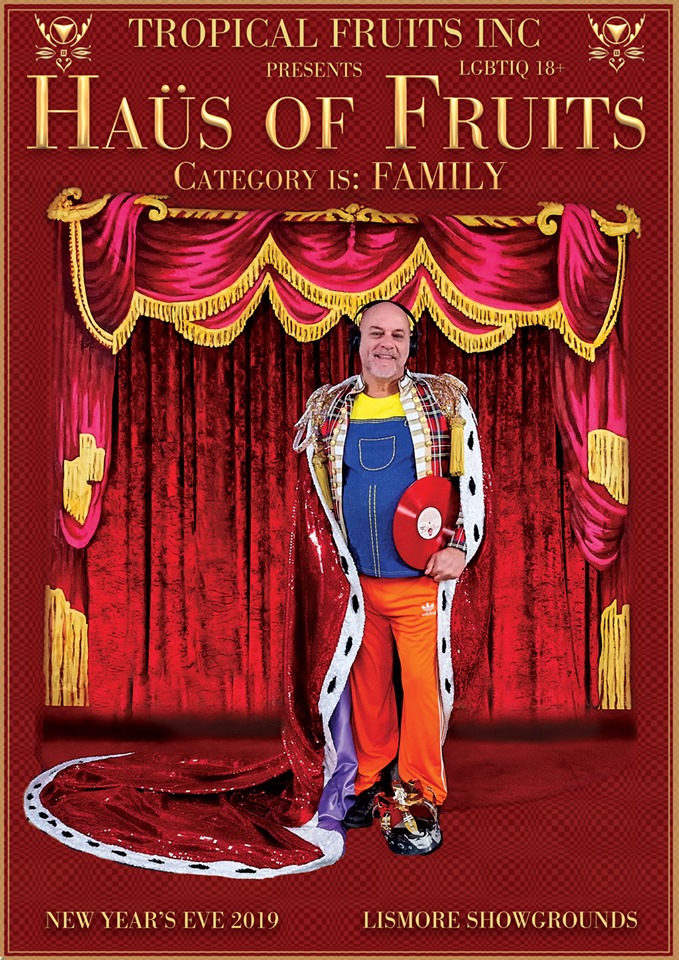 Nora has lived in the area for 30 years and has been heavily involved with Tropical Fruits for over 20 of them. Nora has been our entertainment coordinator, a previous committee member as well as our current NYE Cabaret manager for a number of years now Media and marketing have always been a part of who Nora is. Currently hosting a radio show on 88.9fm, she was previously on 2LM for 4 years as well as a voice over master for Channel 10.Known locally as the Queen of Tregeagle and doyenne of her famous outdoor soirees, Nora is truly a celebrity within the Fruits world. 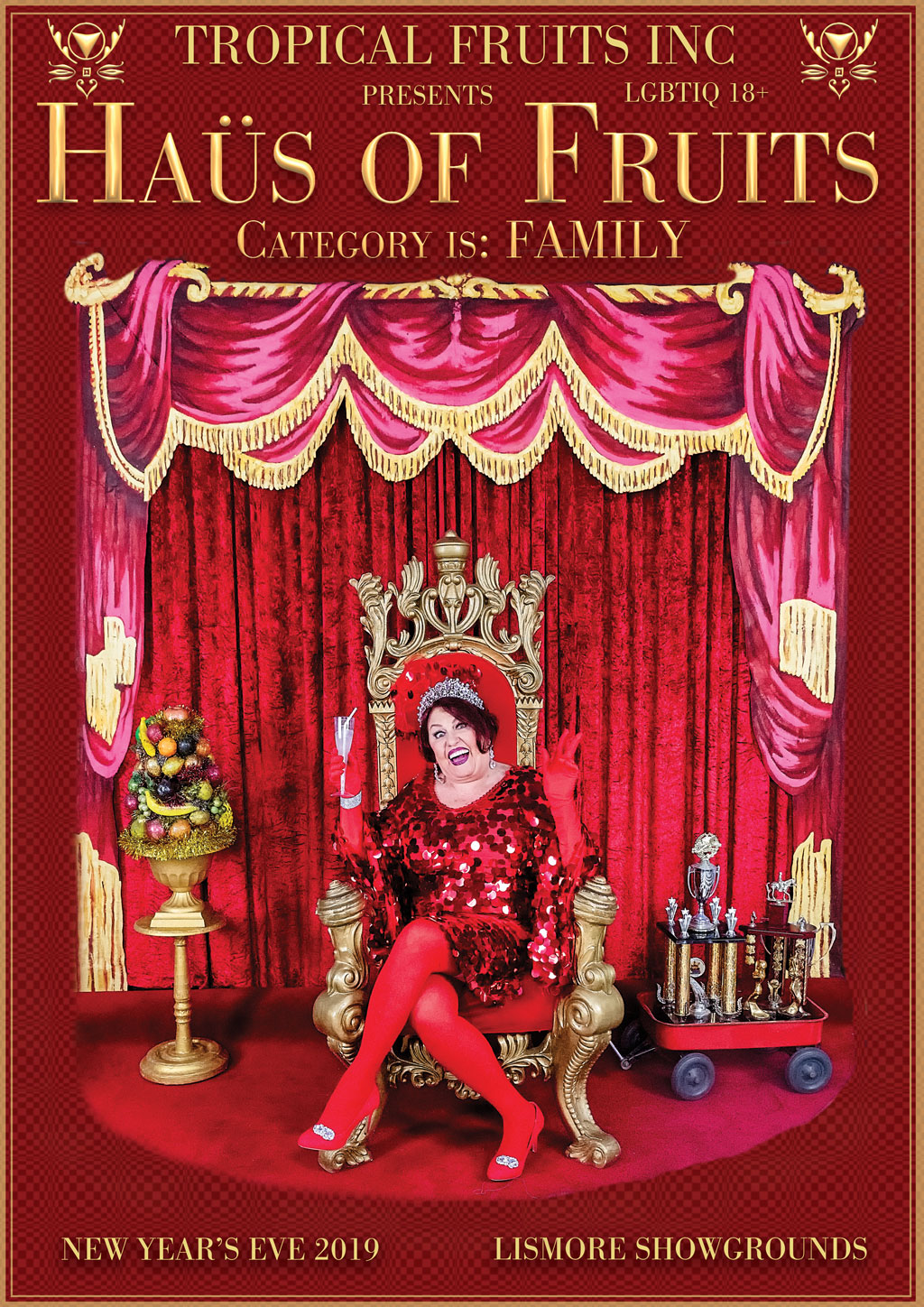 Are you ready to finally meet our Tropical Fruits Haus Mother?

Maude the Grand Dame of Australian Drag - Mentor, Drag Mother and Glambassador. A long term volunteer, former committee member, event coordinator and artistic director for Tropical Fruits - our festival has become the artistic flagship it is with considerable input from her.  Maude has been an ever increasing glittering presence of legendary status in the LGBTIQ world.
With perfection as her goal and performance as her trade, Maude has changed what Australian drag looks like and brought us a new level of camp. Maude (AKA Michael Gates) is Lismore born and raised by a Beauty Queen mother and a Lord Mayor father. A former bridal store owner, her incredible headpieces and gowns have been seen everywhere including ‘Priscilla Queen of the Desert’.  She has performed all over the country, won 18 DIVA awards and has been inducted to the DIVA Hall of Fame.  Very few within the LGBTIQ community would have to ask who Maude is.

Something we hear over and over from her audiences whenever Maude performs is: 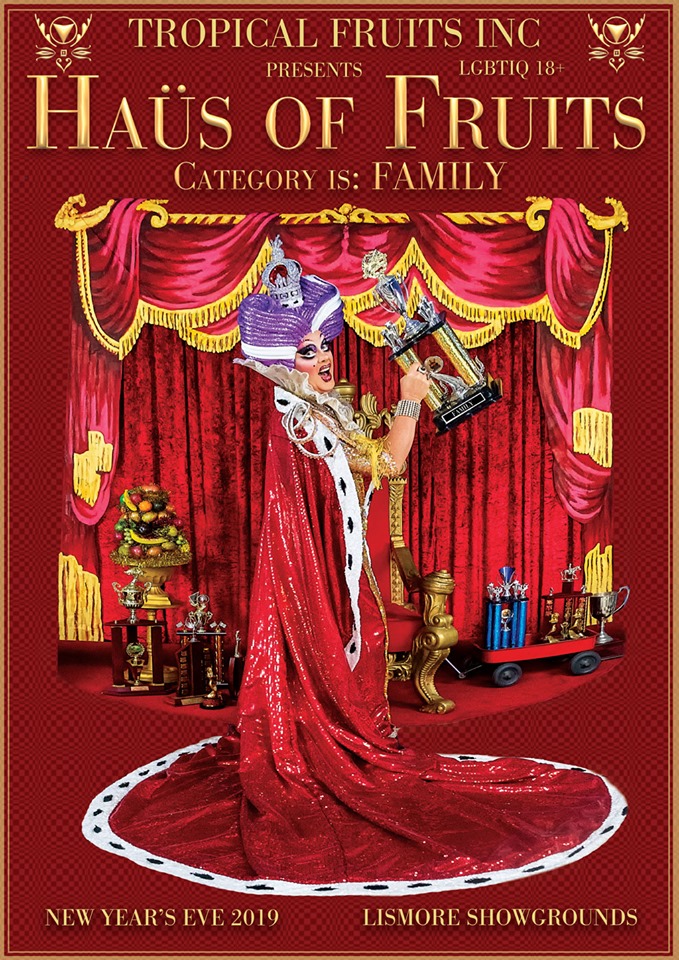 It is with great joy we reveal Maude as our Haus Mother.