The Tropical Fruits Inc, established in 1988, is the premier LGBTIQ community group in the Northern Rivers in NSW. We are a not-for-profit, incorporated association that holds regular events for our diverse members and guests. We are a self funding, independent and voluntary organisation.

For over three decades, the Northern Rivers region has had an organised gay and lesbian history. In March 1981, the first openly gay and lesbian event was advertised in Nimbin News, announcing a bar-be-que at Whian Whian for members of the 'gay and transgendered' communities. In June 1981, a meeting was held at the Bluebird Restaurant in Lismore. The Northern Rivers Gay Group (NRGG) was formed with a committee being elected. NRGG grew quickly, organising pinics, bar-be-ques, beach parties and balls.

From this time through to 1988, the social calendar for the gay, lesbian and transgender (g/l/t) communities was busy. A number of venues and farms operated as meeting places, including the Bluebird and Doubt Dutch Restauarnts in Lismore, Mandala near Uki and Lawrenece Station near Grafton.

Social groups came and went. At the end of 1982, Northern Rivers Gay Group was disbanded. Later, Summerland Gay Women was formed, met at Double Dutch and later metamorphosed into Summerland Gay People, which also folded when Double Dutch was closed.

Political controversies occurred through these years too. In 1984, the then-editor of the Northern Star published a series of homophobic editorials around the gay and lesbian communities and the Human Immunodeficiency Virus (HIV). The local gay radio show was also involved in a debate concerning content of programmes.

In June 1988, Tropical Fruits was formed following the disbandment of Summerland Gay People. Using bands of faithful volunteers as its organisation principle, Fruits' membership and reputation grew quickly through the later 1980s and 1990s by holding regular parties and picnics at local beaches or members' farms and dances at country halls in the area.

In 1997, the New Year's Eve party was moved from Repentance Creek Hall to the Rugby Union Club in Lismore. Rainbow Circus 1 was created with two marquees, fireworks, luscious sounds, live music and other performances.

The administration of Tropical Fruits finally moved out of member's loungerooms when the Clubhouse (known as "The Fruitbowl") was opened in December 2004. It rapidly become a de facto community centre with an office, workship space and storage area. It now also functions as a meeting place for local LGBTIQ groups as well as regular activities like Crafternoons.

In 2008, Saint Erif was diagnosed with a terminal illness and tragically passed in January 2009. She was instrumental in establishing the land fund for a future Fruits' home. Later in 2009, it was renamed the Erif Benham Memorial Land Fund. Also in 2009, Fresh Fruits, the most recent youth group within Fruits, was formed and the Queer Fruits Film Festival was added to the end-of-year party, thus making it a festival.

Through all these years, Fruits' has expanded with part-time staff helping with administration and event organisation. By 2011, there were 17 sub-committees, each one working around particular areas like governance or Fruitopia Fair Day. In late 2011, the Fruitbowl was purchased by Tropical Fruits, this being the first time that a regional LGBTIQ group in New South Wales (possibly Australia) has bought its own home.  In 2016, the vacant block next door was purchased, with a view to developing the paddock for much needed parking, storage, craft and meeting spaces.

After several years of discussion and consultation, in 2017 the members voted to change the governing objects of the Tropical Fruits constitution to Lesbian, Gay, Bisexual, Trans*, Intersex and Queer (LGBTIQ).

'Our People, Our Places, Our Parties' 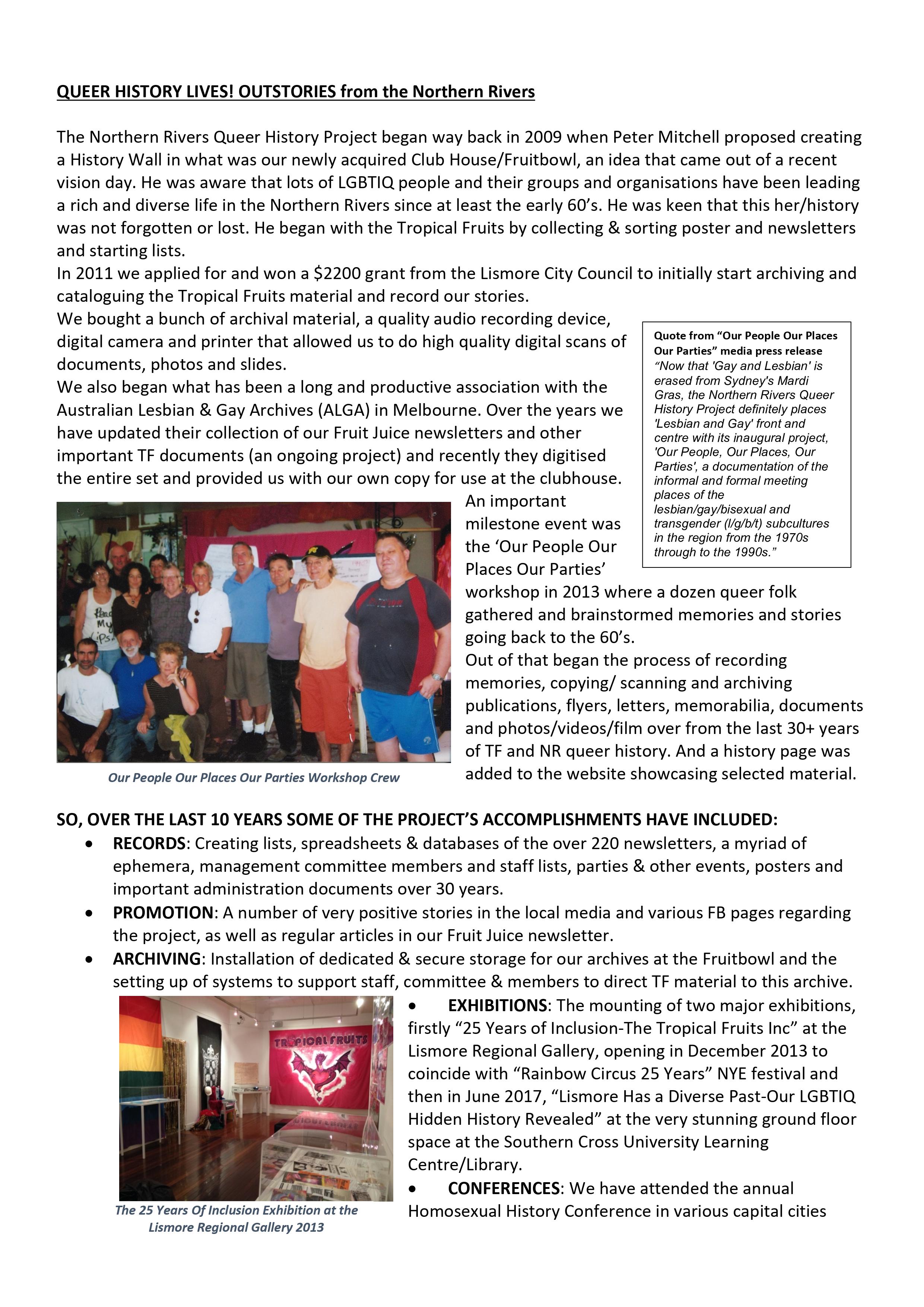 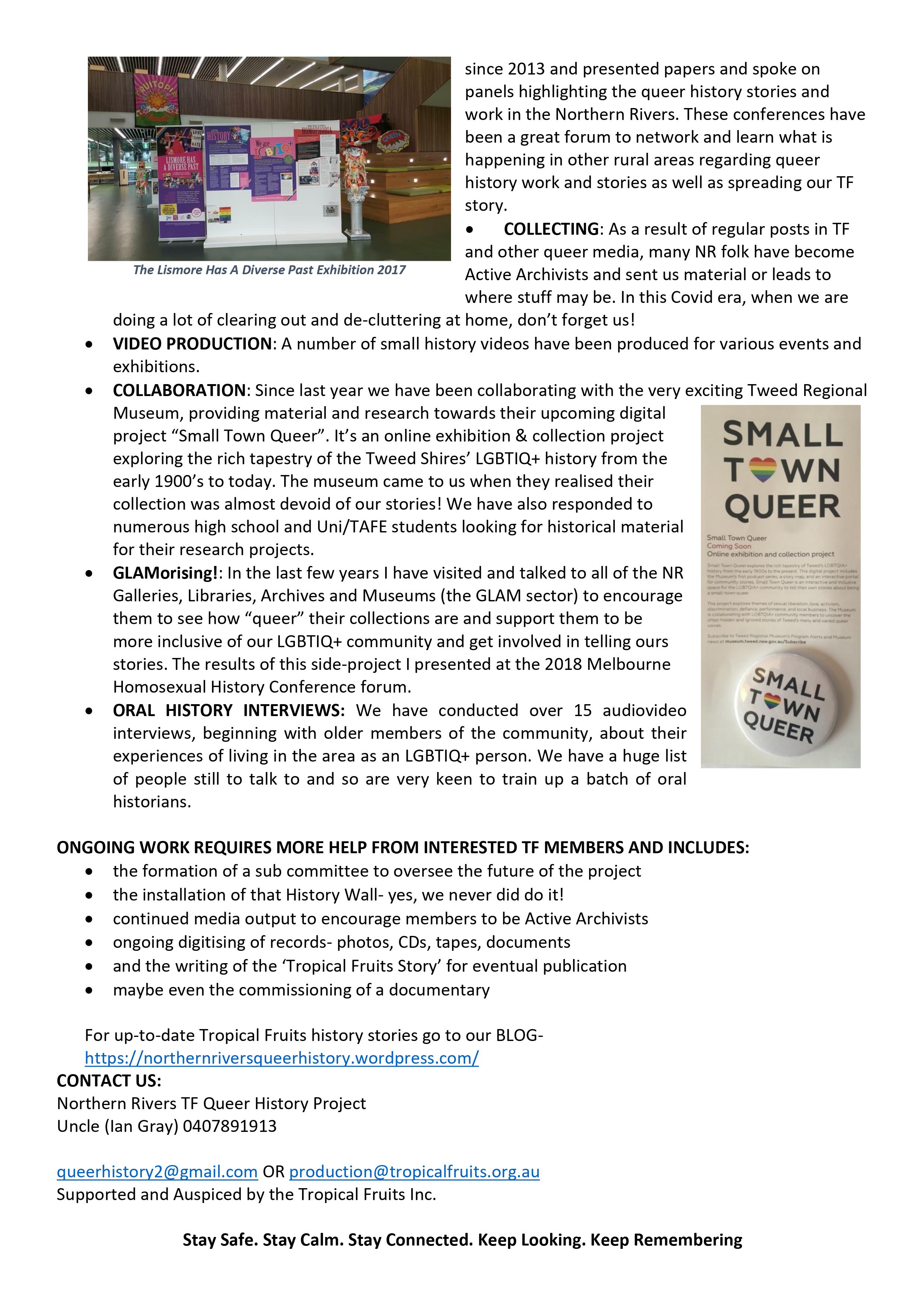